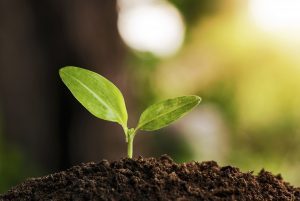 Steve Siverling plants corn, soybeans and a few small grains on 350 acres in northern Wisconsin.  Some might call him a corn farmer or a soybean grower, but Steve considers himself a soil farmer, more specifically “a biological farmer.”

Steve’s journey to being a soil farmer began about 20 years ago when he purchased 32 hectares (80 acres) of land on which he couldn’t grow crops. The soil just wasn’t healthy enough. Rather than abandoning the land, Steve decided to invest in its future…and his.

He consulted agronomy experts and added natural soil amendments such as calcium lime and manure. He alternated corn, cereal rye and soybean plantings, chopped the plant residue (the plant stems and leaves that are left in the field after harvest) and incorporated the plant matter back into the land. Slowly the soil began to improve. “After several years of this treatment, I started to notice a change.”

Change came in tangible improvements: the land was easier to plow, yields didn’t drop as much during periods of drought, and the crop quality was noticeably better. Year after year the soil became more fertile, and Steve has used what he learned on this one plot of land to improve the soil health throughout his entire farm.

Steve started out trying to bring back the soil on one section of land, and now he continues to research, experiment and learn about ways to nurture the soil.

“I am very interested in the various combinations of cover crops. For us farmers in Northern Wisconsin, we are limited in what we can use because of the length of our growing season. Am I going to be able to get a dollars and cents return-on-investment for this? I don’t know, only time will tell; here’s hoping.”

To read more about what Steve has learned about cover crops and the role earthworms play in soil health, read his blog here.