Insight & Opinion: Europe Has Forgotten the Farm in Farm to Fork

The EU’s Farm to Fork strategy will stifle the very innovation needed to feed a growing world population sustainably, says U.S. Secretary of Agriculture Sonny Perdue. He fears that “the EU is letting inaccurate public perception rather than sound science drive policy, which will prove to be at the detriment of their own hardworking farmers and the world’s consumers.”

Europe Has Forgotten the Farm in Farm to Fork

The United States and Europe share a great history, a history that goes back centuries and will continue for centuries to come.

This shared history has seen the advent of new technologies that have transformed life and bettered the human condition.

As the world population continues to grow, we are all faced with the common challenge of how to produce enough food while maintaining the health of the environment. While we in the U.S. share the EU’s commitment to sustainability, we disagree on how best to achieve it. 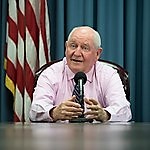 I am convinced that embracing innovation and technology in agriculture is the only way to sustainably feed the world for centuries to come.

Farmers and producers around the world are facing the same two overarching challenges:

First, to produce enough food and agricultural products to meet the needs of growing populations and rising standards of living.

And second, to have sustainable production systems in place that meet growing food demand year after year.

By 2050, it is estimated the world population will reach 10 billion people. That’s a lot of hungry mouths to feed.

The healthy feeding of that population increase literally presents a life and death challenge. Since we are working from a fixed resource base, to be successful we must embrace the technological advances and innovations of modern agriculture that increase productivity.

As a practical matter, farmers need to be profitable and food needs to be affordable even as we reduce agriculture’s environmental footprint. To ensure that, we must balance the environmental, social and economic dimensions of sustainability.

Technological innovations that expand productivity are the only way to satisfy all three of these dimensions.

Environmental sustainability is critical if we are going to maintain the health of our soil, water, and air while meeting food and fiber demand. The only way we’re going to feed the world while minimizing agriculture’s impact on the environment is by producing more with less total inputs. The good news is that we know it can be done.

Over the last 90 years, commodity production has increased by 400 percent while acreage in production has dropped by nine percent. An approach that unnecessarily sacrifices productivity to meet environmental goals will fail the responsibility of feeding the planet, and likely blunt the economic dynamism of the farm sector.

Social sustainability needs to be a priority.

By increasing productivity and efficiency we contribute to food security by improving the accessibility and affordability of food.

This dramatic transformation happened in great part due to increases in agricultural productivity. Thanks to policies that spurred investment in new technologies, we are able to produce more food and trade it globally, which directly benefits consumers all over the world. Improving environmental and economic sustainability counts for nothing if consumers cannot afford to put safe, high quality food on the table.

Farming needs to be profitable to continue to attract young farmers to the profession.

Increasing productivity is one of the only ways to ensure decent livelihoods for farmers and farm workers. We know farmers will continue to face input and regulatory costs in the future. That means they will need a reliable way to increase income to stay in business.

Farmers all over the world want to earn their income at the market.

I met with European farmers just outside Brussels earlier this year. Many of them shared concerns that farming is becoming a welfare profession due to government policies. Moreover, successful farmers are usually the best environmental stewards. In the United States we’ve seen that profitability and environmental protections do not have to be mutually exclusive.

American farmers are achieving a dramatic increase in productivity with fewer resources by harnessing innovation and technology. By producing more with less we have a chance to address all three dimensions of the sustainability challenge.

The EU is taking a different approach, one based more on “political science” than demonstrated agricultural science. This approach will stifle innovation and tie the hands of European farmers.

While we commend the EU’s commitment to sustainability, the Farm to Fork Strategy as proposed is a recipe for high cost and low output agricultural production.

Not only does that undermine sustainability, but threatening to make farmers less competitive has already led to calls for trade protectionism. The EU cannot take away the tools of European farmers and expect them to be able to compete in the global economy.

Putting barriers between the world’s producers and consumers, discouraging innovation needed to increase production, and stifling economic growth is exactly the wrong way to meet the global food challenge.

With this strategy it appears Europe has forgotten the “farm” in “farm to fork.”

Farmers must be able to utilize technology and innovation rather than be hindered by government policies that restrict growth and stifle innovation. I fear the EU is letting inaccurate public perception rather than sound science drive policy, which will prove to be at the detriment of their own hardworking farmers and the world’s consumers.

We hope to continue to build upon our shared history by working together to feed the growing world.

As global leaders, we should move forward with policies to protect the environment and enhance food security, and our policy formulation should be transparent, data-driven, and science-based.

The United States and EU have long been partners, but we must agree on sound science rather than political science if we are to succeed in this shared goal.

This article first appeared in EUobserver, a not-for-profit, independent online newspaper established in Brussels in 2000.