Feeding the World: The Challenge of Our Lifetime

How will we feed a human population that will triple in our lifetime without depleting the world’s natural resources? The 2019 Borlaug CAST Communication Award* winner Dr. Frank Mitloehner, a professor and air quality extension specialist at the University of California, Davis, considers how we can meet the biggest challenge of our generation. 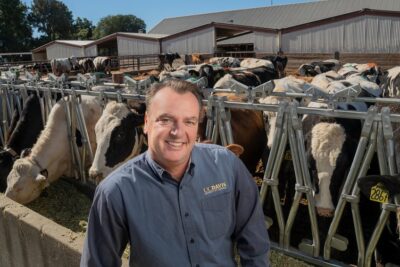 The human population will triple in our lifetime. The 2050 challenge is how to provide enough food for this growing population without depleting the natural resources we all depend on. Adding to this challenge is the fact that population growth varies dramatically between developed and developing countries. There are more people living in South and Southeast Asia than in the rest of the world combined. And this number is set to grow by 41 percent, while the population in Africa is predicted to grow even more, by 50 percent. In the Americas, population growth is fairly stable – we are not a main concern of future food security issues – and in Europe the population is expected to shrink. Agricultural productivity varies dramatically, too, with some parts of the world successfully doing more with less, while others lag behind. What is the solution?

It is not simply a case of producing more food to feed more mouths. There is a limit to how much global cropland is available for us to be able to do that. Two-thirds of the land we have is so-called marginal land because either the soil is not good enough or there isn’t enough water for growing crops. This land can only be used by ruminant livestock, as what is grown here simply isn’t suitable for human consumption. This leaves just one-third of land as arable land, which can be used to grow crops. With limited land and an ever-growing population, it is evident that we need to use all means necessary and possible to augment agricultural production.

Enhancing agricultural production is just part of the solution, though. One of the greatest environmental issues facing the global food supply chain is food loss and waste. In the U.S. alone, as much as 40% of food grown goes to waste. What I find surprising is that this number holds true not just in developed countries like ours, but also in the developing world, though for different reasons. A lack of refrigeration to preserve food or the difficulty of moving produce from the field to distribution centers – these are just some of the factors contributing to food loss and waste in developing countries. In the U.S., food loss and waste occur mainly at the consumer-level, in restaurants and in the home. Clearly this is an area where we can and need to make major changes.

The parts of the world with the highest increase in human population also have the lowest rates of agricultural productivity, which is why they are the primary focus of the 2050 challenge. In many countries, dairy cows produce a dismal amount of milk when compared to developed countries. Consequently, these countries have very large herds of livestock to produce the amount of food people require. In sharp contrast, countries where production is very high have been able to shrink their herd sizes. And this is a very important concept. The more productive you become with your dairy herd, the more you enable the country to shrink its herds, and if you shrink herds then you also shrink environmental footprints. It is that simple.

Feeding more people by increasing livestock herds is not something we want to continue. The alternative is sustainable intensification throughout agricultural production, throughout the world. We must help inefficient regions to become more efficient.

In the United States we have improved reproduction per animal, we have improved healthcare, and we have improved genetics, while at the same time feeding more energy-dense diets. Those factors combined have allowed us to shrink herd and flock sizes to historic lows. According to U.S. Department of Agriculture (USDA) calculations, there are, for example, 50 million fewer beef cattle today than in the 1970s. But we are producing the same amount of beef today as we did back then. Similarly, we have tripled pork production since the 1960s. In 1950 there were 25 million dairy cows in the United States. Today there are just 9 million but with this much smaller herd we are producing 60 percent more milk, which has shrunk the carbon footprint of our dairy herds by two thirds. This is an astounding accomplishment and one that needs to be replicated around the world.

In the United States, farm inputs have remained relatively steady over time, whereas total agricultural outputs have increased dramatically. That is down to sustainability. We need to know how to do more with less and we need to be able to do it globally. We know how to do it but we need to make sure that we have the social licence to continue with it.

There are many people who want to take that social licence away, who say that what we do today is wrong and that we should go back to the 50’s or 60’s. But I have news for them. Not only are we not wrong, we are the envy of the world when it comes to food production. We have to tell our story and we have to tell it right. This means fact-based information that we must get out in a credible way.

Feeding the world: The challenge of our lifetime

The majority of animal-based emissions today occur in developing countries and are a result of low efficiencies. We know that we can reduce these emissions, not just from animals directly but from their waste, and we can achieve dramatic results. This is both necessary and feasible. We know that technologies and regenerative practices hold the key to environmental mitigation – and helping us be more productive and feed more people while respecting the land and other natural resources at our disposal. Having the social licence to continue to use those technologies is key.

According to figures from the Food and Agricultural Organization (FAO), production intensity and emission intensity are inversely related. In other words, when productivity goes up, emissions go down in relative terms. People may not grasp what this means in food production terms but perhaps it will resonate if I use a fuel efficiency analogy. People recognize that their car today is more fuel efficient than their parents’ or grandparents’ car was. With a more fuel-efficient vehicle you still drive a hundred miles but you do so with less gas and produce much fewer emissions.

Now is time for us to talk to the public about agriculture and the technologies required for feeding the world without wasting food, in a way that they understand. This is the challenge of our lifetime.

*The Borlaug CAST Communication Award is presented annually for outstanding achievement by a scientist, engineer, technologist, or other professional working in the agricultural, environmental, or food sectors for contributing to the advancement of science in the public policy arena. The award is dedicated to Dr. Norman E. Borlaug, “The Man Who Fed the World” and author of CAST publication #1, and to Dr. Charles A. Black, first CAST President, first Executive Vice President, and member of the founding committee of CAST. These two men embody the passion and dedication to agricultural research and technology that this award is designed to reward.

This article is based on a talk given by Dr. Mitloehner at the tenth annual 2019 BCCA event where he was presented with the Borlaug CAST Communication Award by the Council for Agricultural Science and Technology.