Animal welfare is at the center of many debates surrounding food production systems, global food safety and security. As such, governments and consumers are heavily engaged in the issue, with the latter being vocal about the need to protect animals and their concerns about welfare and environmental impact.

From a farmer’s perspective, animal welfare, sustainability and profitability go hand in hand. Better health for animals leads to environmental benefits: for example, by reducing cow mastitis, we can decrease their greenhouse gas emissions (along with their discomfort and pain). So, as far as consumer concerns go, actual farm practices do in fact not only meet them, but often go further.

In the United States, farmers invest millions of dollars every year in research that is aimed at improving not just productivity but psychological and behavioral welfare of their animals, in the knowledge that happy and healthy animals are the key to a successful operation. 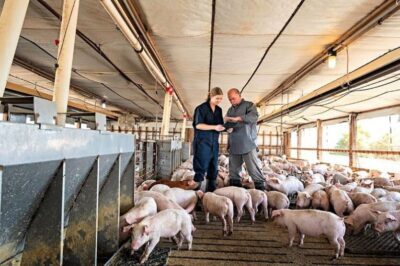 “The U.S. has some of the strongest animal welfare programs in the world”, says Cheyenne McEndaffer, Senior Director for Export Services at the U.S. Meat Export Federation. “On the farm side, producers can opt for both individual and site certifications under voluntary programs called the Beef Quality Assurance (BQA) and Pork Quality Assurance Plus (PQA+). Participation in both programs is more than 85%, driven by several factors including some slaughter plants requiring that animals come from certified farms and producers’ drive for continuous improvement, not least to ensure that there will be a sustainable farm or livestock operation to pass on to the next generation.

“Animal handling practices and programs found in our slaughter plants truly are the gold standard of the world. To be an eligible supplier to major U.S. foodservice and retailer operators, slaughter plants have to comply with very stringent animal welfare standards, as dictated by third party standards and verified through internal and third-party audits throughout the year. These incredibly robust standards build upon existing animal welfare protection regulations overseen by the food safety authority in the U.S. – combining together to make the U.S. animal welfare outcomes some of the best in the world.

Farmers going above and beyond

Despite the external pressure, farmers are ahead of the curve. For example, voluntary standards that respond to commercial requirements and best practices often go well beyond established regulations and introduce strong animal welfare components. It can be too easy to say that such voluntary standards are insufficient because they lack legal compliance procedures. However, this ignores the fact that farmers know their animals, notice how they behave and care for them and, of course, make a living from them.

According to Dr. Tiffany Lee, Director of Animal Care and Compliance at Clemens Food Group, internal and third-party audits are common for livestock producers. Such audits also provide a check to ensure that high standards implemented voluntarily in the industry are not diluted over time.

There are certain cases, such as an instance of animal abuse, where meat producers would sever ties with a supplier. However, in cases where audit results may not be ideal, but improvements can be made, links with suppliers are not severed straightaway. Instead, suppliers and producers come together to find solutions because “they want to make sure animals are well cared for and healthy so that they can produce healthy, safe, wholesome food for their customers,” says Dr. Lee.

“Most people don’t realize that farmers naturally bond with the animals they care for and invest thousands of dollars in each one of them. From an economic, business, and emotional perspective, it is in a farmer’s interest to keep animal welfare on top of their priorities,” says Dr. Lee.

U.S. livestock and dairy producers use the latest technologies to create environments where the animals feel comfortable, content, and stress-free. For example, rumination devices, nutrition monitoring systems, waterbed mattresses, fans so cows can cool down, robotic systems to relieve animals from the pressure of the milk (and reduce potential infections), and shade systems all play their part. 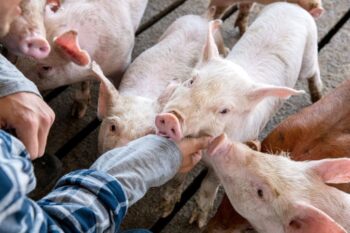 Perhaps the main issue on animal welfare is not animal handling or environmental stewardship, but rather consumer understanding of how animals are raised and the environmental and economic impact of specific management systems (e.g., free-range eggs have a greater economic cost and environmental footprint than ‘cage eggs’).

The challenge for farmers is to dispel myths and misinformation about how animals are raised and educate consumers on the realities and practicalities of livestock and poultry production. For Tina Hinchley, a dairy farmer from Cambridge, Wisconsin, hosting farm tours is her way of demonstrating that what she is doing is what is best for her cows, as well as being open and transparent about how she farms. “It tends to be an eye-opening experience for many of the folks who come to our farm, when they see how well we look after our animals,” she says.

Farmers everywhere know that it is on them to ensure the next generation can continue to use the land, grow crops and raise animals in a safe and sustainable environment. Farmers need to continue managing their animals, herds and flocks to the highest standards, whether regulated or not, to prevent disease outbreaks and minimize risks to their animals and themselves.

It would be a mistake to assume that maximizing profit would be at the expense of animal welfare. In fact, profitability and welfare go hand in hand. Appropriate animal handling reduces stress and injury improving the quality and safety of meat.

In Tina Hinchley’s words, “every dairy farmer is a hardworking individual that cares passionately about their animals, the land and everything that’s happening on their farm. Its farmers who feed the world, and they love what they do”.

For more on American farmers’ commitment to animal welfare, tune in to the USSA podcast.