The U.S. rice industry has shown outstanding accomplishments in the past 36 years across the three pillars of sustainability (environmental, economic, and social) including key environmental resource markers: land use and soil conservation; water use and quality; energy use and air quality; and biodiversity. 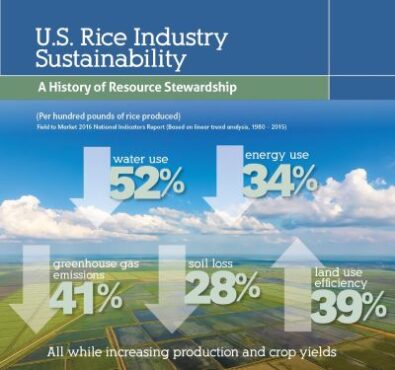 Each year, over 9 billion kilograms (20 billion pounds) of rice is grown and harvested by local farmers on 2.7 million acres (1.1 million hectares) of sustainably managed farmland in the states of Arkansas, California, Louisiana, Mississippi, Missouri, and Texas. Rice conservation practices continue to advance and evolve, and the goal remains the same: produce more rice while using less water and less energy; improve water quality, air quality, and soil conservation; and enhance wildlife habitats to support biodiversity. All without the use of genetically modified organisms (GMO’s).

In order to provide credible, third-party verification of sustainability to customers, all major Alaska fisheries are certified sustainable by the Alaska Responsible Fisheries Management Certification.

This is How We Grow, Harvest and Produce

We are a diverse range of U.S. organizations linked by our individual accomplishments in growing, harvesting and producing across U.S. agriculture, forestry and fisheries through our long history of conservation stewardship. Sustainability is not measured by an arbitrary threshold; it requires a commitment to innovation and continuous improvement.